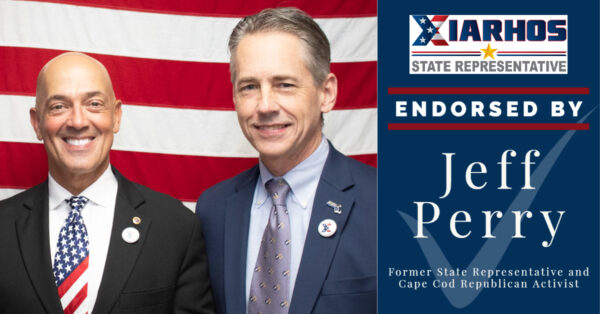 “I am very pleased to provide my endorsement and support to Steve Xiarhos to be the next State Representative for the 5th Barnstable District,” said Perry. “Having known Steve for many years, it is clear he is a compassionate professional in all aspects of his life. We need elected officials who are firm in their values and who are willing to listen and learn about issues and the opinions of voters. From being a decorated police officer to a Gold Star Father, Steve’s life and family have been focused on honorable public service. The voters of Sandwich, Bourne, Barnstable and Plymouth will be well-served by voting for Steve Xiarhos as their State Representative.”

“Jeff Perry served the people of the 5th Barnstable district with passion, pride, and integrity during his years as our State Representative,” said Xiarhos. “He consistently advocated for causes that mattered to our district, while championing the application of conservative principles to solve problems facing our Commonwealth. He was a leader for the 5th Barnstable District and has always been an outspoken grass roots activist for the Republican party and its ideals. To this day, he remains someone who is well-known and respected by conservatives across Cape Cod. I am honored and humbled to receive Jeff’s endorsement of my campaign, and I thank him for his support.”

Jeffrey D. Perry represented the Fifth Barnstable district in the Massachusetts House of Representatives from 2003-2011. He was also the Republican nominee for United States Congress in what was then known as the Massachusetts 10th Congressional District in 2010.

Throughout his service as State Representative, Perry distinguished himself as a reform-minded leader and someone who was always willing to take a stand in favor of principles that mattered to him and to those he represented – whether that meant reaching across the aisle to work with members of the other party, or if it meant not being afraid to stand alone for what needed to get done.

In recent years, Perry has taught courses on Constitutional Law, Criminal Evidence, and American Government at local colleges. He is the recipient of a Juris Doctorate Degree from New England School of Law. There, he was presented the Dean Timothy J. Cronin, Jr. Award, which recognizes the student who has shown the greatest promise of outstanding contributions to public service.