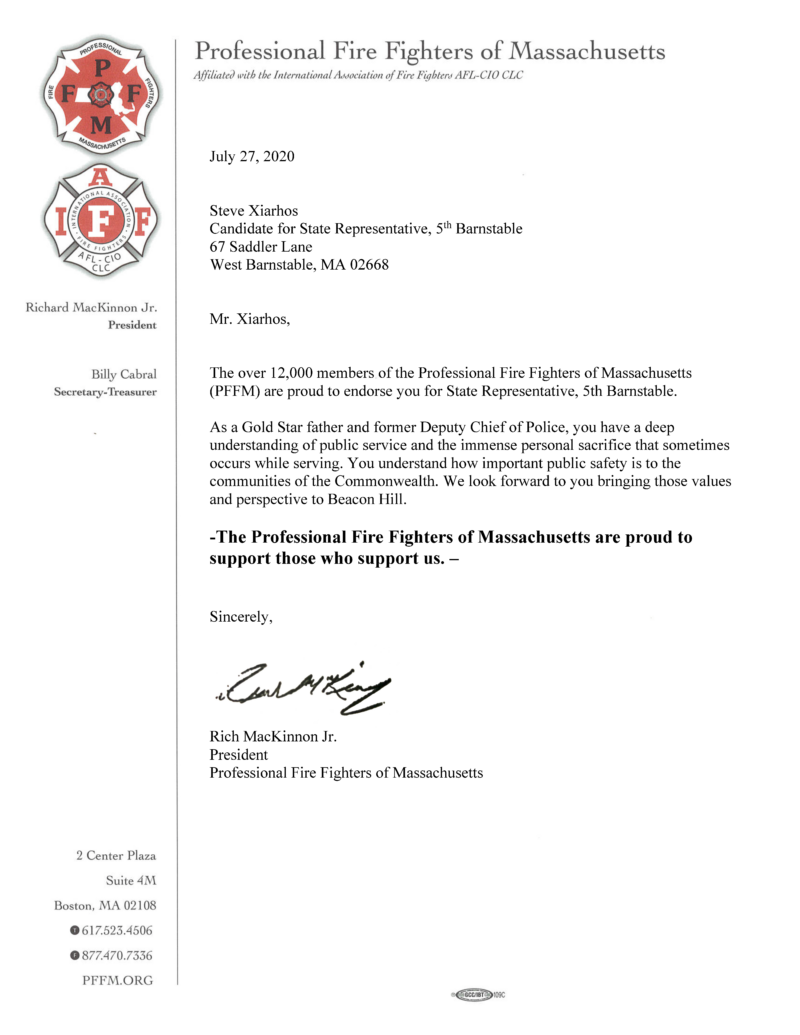 BARNSTABLE – Steve Xiarhos, Republican candidate for State Representative in the Fifth Barnstable District, announced today that his campaign has received the endorsement of the Professional Fire Fighters of Massachusetts.

“As a Gold Star father and former Deputy Chief of Police, you have a deep understanding of public service and the immense personal sacrifice that sometimes occurs while serving,” MacKinnon continued. “You understand how important public safety is to the communities of the Commonwealth. We look forward to you bringing those values and perspective to Beacon Hill. The Professional Fire Fighters of Massachusetts are proud to support those who support us.”

“I am enormously humbled and honored to receive the endorsement of the Professional Fire Fighters of Massachusetts, and I am grateful for their support,” said Xiarhos. “Like our police officers, fire fighters serve an incredibly important role in our community with dedication and integrity. They put in long hours away from home and their families, doing dangerous and stressful work, all in the name of keeping us safe. Far too often, our elected officials forget about our honorable first responders and fail to credit their commitment to public safety and their sacrifice – or, even worse, they turn their back on them. That is unacceptable. I believe first responders are heroes, and their professionalism deserves our appreciation and support. As a State Representative, I will always have their back.”

The Professional Fire Fighters of Massachusetts represents over 12,000 union fire fighters from across Massachusetts. First organized in 1945, the organization is affiliated with the International Association of Fire Fighters, AFL-CIO CLC.