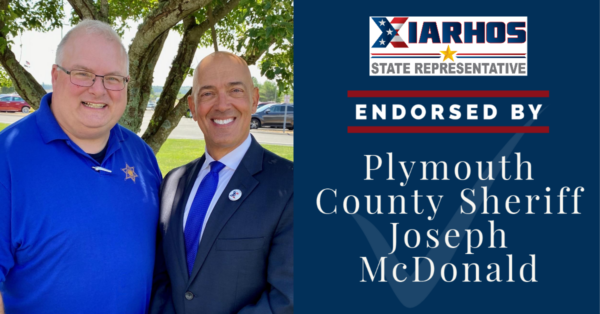 “As a former police officer and Deputy Chief of Police, Steve Xiarhos knows what policies will help to keep our communities safe,” said McDonald. “Steve knows how important it is for law enforcement to have the information and resources needed to get the job done. And, he knows how important it is to keep up our fight against violent crime and opioid abuse. Steve is not afraid to stand up and advocate for our first responders when they need support, such as with his recent opposition to the Police Reform Bill. These are important priorities, and there is no candidate I trust more than Steve Xiarhos to help keep people on the South Shore and Cape Cod safe and secure. He is the only one who has the experience needed for the job. I am proud to endorse Steve Xiarhos for State Representative.”

“I am humbled and gratified by Sheriff McDonald’s endorsement, and I thank him for his support of my campaign,” said Xiarhos. “Sheriff McDonald is well-respected by his colleagues as an advocate for law enforcement in our region. He not only has impressive experience and training in law enforcement issues, but he is also an attorney and former prosecutor. People on the South Shore know they can trust Sheriff McDonald to help keep them safe from violent criminals.”

Sheriff Joseph D. McDonald, Jr. was first elected in November 2004, and sworn into office by then Massachusetts Governor W. Mitt Romney on January 5, 2005. He is the 30th High Sheriff of the County of Plymouth, an office which dates back to 1692. Previously, he served for almost nine years as an Assistant District Attorney for Plymouth County. A lifelong resident of Plymouth County, he and his family have made Kingston their home for the past two decades.

He is a graduate of the University of Massachusetts at Amherst, where he received his Bachelor of Arts degree, and Suffolk University Law School where he received his Juris Doctor degree. In 2017, the Sheriff was proud to receive the FBI Trilogy Award, upon his successful completion of specialized training in law enforcement supervision, management and command.