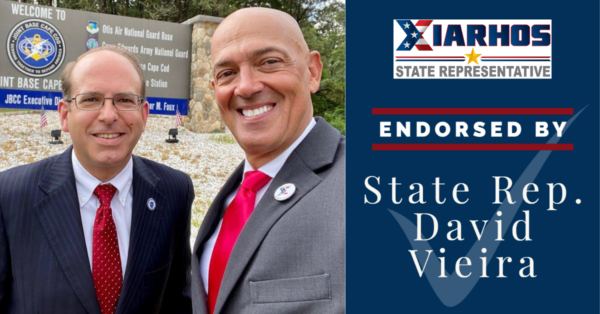 “I recently had the opportunity to catch up with my friend Steve Xiarhos at Joint Base Cape Cod to discuss the tireless efforts he and his group of volunteers at FOOD4VETS have invested to make sure our vets and military families have food security during this difficult time. He has pulled off over 60 events in eastern Massachusetts in the last couple months, all while campaigning to be my colleague in the House! I don’t know where he gets the energy, but if he brings the same level of energy and professionalism to the House of Representatives, the 5th Barnstable District will be well served. I am pleased to endorse Steve Xiarhos for State Representative.”

“I am extremely grateful to have Rep. Vieira’s support,” said Xiarhos. “David Vieira is a distinguished public servant who has represented the people of Bourne, Falmouth and Mashpee with honor and integrity. He has worked especially hard on issues regarding public safety, education, and public health. His past work also involves a commitment to working with officials at the local level to improve the quality of government. I appreciate his support and, if elected, I look forward to serving in the Legislature alongside Rep. Vieira to serve the best interests of Cape Cod.”

One year after returning from college, Vieira was elected the youngest town moderator in Falmouth’s history and reportedly the second youngest in the history of the Commonwealth. His work led him to be elected director of the Massachusetts Moderators’ Association for two terms, in which capacity he served on numerous panels and committees working to preserve the town meeting form of government, and also trained many new moderators across the Commonwealth.

In 1999, Vieira went to work for Barnstable County Sheriff James M. Cummings as Special Assistant to the Sheriff, where he was tasked with developing and implementing various youth programs. Following the terrorist attacks of September 11, 2001, Sheriff Cummings appointed Vieira as Director of Intergovernmental Relations & Citizen Corps. In that role, he successfully started the first Community Emergency Response Team (CERT) on Cape Cod. He also trained and coordinated involvement of CERT teams in the Town of Falmouth, Mashpee, and Sandwich. He also has extensive experience working with officials FEMA to coordinate response to hurricanes.

Shortly after joining the Legislature, Vieira was honored when elected by his peers as a freshman legislator to serve as a director of the Massachusetts Legislators’ Association in May of 2012. He also served as the only House member on the Governor’s Special Commission on Compounding Pharmacies, helping to craft recommendations for pharmacy oversight following the deadly New England Compounding Center meningitis outbreak in 2012. In 2013, he was appointed to the Special Commission on Early Education & Care Operations and Finance. Cape Cod Child Development honored Representative Vieira for his work on the Special Commission with the 2014 Community Service Award for “his advocacy, leadership and commitment to addressing the issues effecting children and families across the region.”

Vieira and his wife, Rebecca, reside in East Falmouth with their daughter.