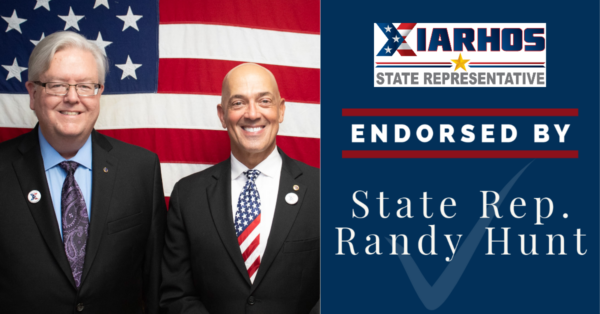 “Steve has the perfect blend of professional and life experiences to represent the people of the 5th Barnstable District,” said Hunt, who announced in 2019 that he is not seeking reelection this year. “A career-long first responder, Gold Star father, and foremost leader on Cape Cod for struggling families, Steve demonstrates his true colors every day by walking the walk. Spending time to listen to future constituents from small business owners, workers and retirees to the many whose lives have been upended by the coronavirus pandemic shows how Steve will remain close to district residents as State Representative. He has my full support and I ask residents of the 5th Barnstable District to vote for Steve Xiarhos on September 1 and again on November 3.”

“I appreciate Rep. Hunt’s endorsement and I sincerely appreciate his dedication and service to the people of the 5th Barnstable District,” said Xiarhos. “Randy has represented us for a decade, always demonstrating qualities of integrity, civility, and most importantly, hard work and dedication. People know him as someone they can talk to, someone who will listen to their concerns and who will fight hard for issues that matter to our area. He’s a proven leader for our district and he has earned the trust of the people he has represented. That’s what a State Representative should be. I hope to bring the same personal qualities to Beacon Hill if elected this fall.”

Randy Hunt has represented the 5th Barnstable District since January 2011, when he was elected to fill the seat being vacated by fellow Republican Jeff Perry.

Hunt is well-known in the area as not only a State Representative, but also for his private work as a Certified Public Accountant. By virtue of his professional experience, Hunt is respected on Beacon Hill as being thoroughly versed on the complexities and nuances of municipal and state budgeting, as well as tax issues. For the past several years, he has served as the ranking Republican member on the Legislature’s Joint Committee on Revenue and Joint Committee on Healthcare Finance. He also has experience working on issues related to transportation (including management and replacement of the Cape Cod Canal bridges), protecting Cape Cod’s sensitive ecosystem, and working to fight against the opioid crisis.

Prior to being elected State Representative, Hunt served as a member of the Sandwich Board of Selectmen for six years and a member of the Sandwich Finance Committee for three years. Earlier in his career, Hunt worked in a number of high-profile accounting positions within the private sector, including eight years of work with Peat Marwick (now KPMG LLP), where he was promoted to senior manager in the audit practice and spent two years in the firm’s executive office in New York City.

Hunt is a resident of Sandwich, where he and his wife, Mary, do their best to keep up with six grown children, all married, and thirteen grandchildren.