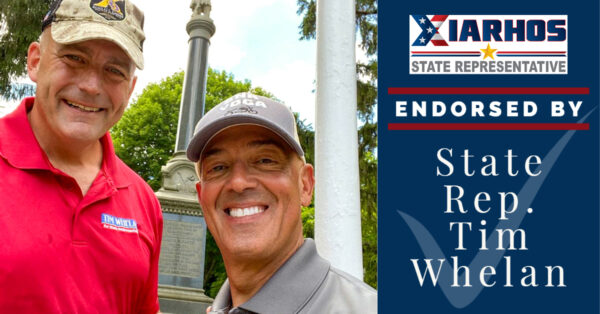 “I am honored to receive the endorsement of my friend and hopefully my future colleague, Representative Whelan,” said Xiarhos. “I was proud to work with Rep. Whelan during my time as Deputy Chief of Police in Yarmouth. He has represented portions of that community, along with parts of Barnstable, Brewster, and the town of Dennis, for a number of years with pride. We share a common heritage of working in law enforcement, and a common appreciation for the need to keep our streets safe from violent criminals. Tim is also a U.S. Marine and has been very supportive of my Gold Star Family in recent years. I am very thankful for Representative Whelan’s support.”

Representative Timothy Whelan (R – 1st Barnstable District) represents portions of the communities of Barnstable (Pct. 1), Brewster (Pcts. 1 and 2), Dennis, and Yarmouth (Pcts. 1, 2, 3, 4, and 7). He was first elected to the Legislature in 2015. Currently, he serves on the House Committee on Ways & Means, and Joint Committees for both Public Service and Higher Education.

Whelan honorably served his country as a United States Marine and also spent 26 years working in law enforcement, most recently as a Sergeant for the Massachusetts State Police.

Due to his law enforcement experience, Whelan has been a leading legislative advocate for public safety issues, including the fight against opioid abuse. He also is a leading voice for transportation safety and infrastructure. In addition, he advocates for equitable funding for public schools, and the housing and economic development Cape Cod needs to make its economy and way of life thrive.

Whelan is a resident of Brewster with his wife of 30 years, and they have two adult daughters. He is also a proud member of several local organizations including Cape Cod Veterans, Inc., Marine Corps League Detachment 125, AMVETS Post 333, the Sons of Erin, and the Former Mass. State Troopers Association.