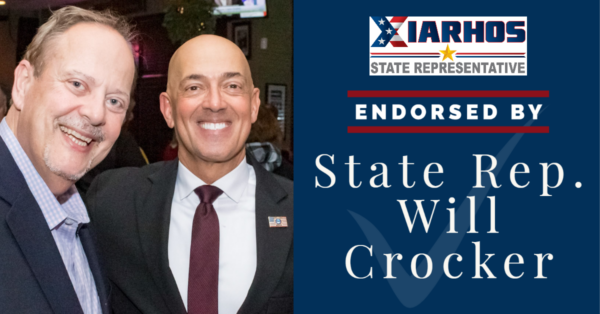 “I believe that Steve will do an excellent job as the next State Representative for the Fifth Barnstable District,” said Rep. Crocker. “I have known Steve for many years through his law enforcement career, and he has shown he has the ability and the willingness to address the needs of his constituents on Beacon Hill. I am proud to endorse Steve Xiarhos for State Representative.”

“I am extremely grateful to have Representative Crocker’s support,” said Xiarhos. “Will Crocker is an extremely hard-working and effective representative serving the people of Barnstable and Yarmouth. In particular, he has been a vocal advocate in the fight against opioid abuse here on Cape Cod, and he has supported additional housing opportunities for our residents. Will also has the back of law enforcement and has been a loyal sponsor of ‘Nero’s Bill’ (H.2037) on Beacon Hill, in addition to pushing for additional police training. If elected State Representative, I look forward to working with Representative Crocker as a team to protect the interests of people here on Cape Cod.”

Will is a true “Cape Codder.” The Crockers settled in the Town of Barnstable with the first families in the 1600’s. Will was born in Hyannis and raised in West Barnstable. He graduated from Barnstable High School in 1975 and attended Cape Cod Community College, subsequently graduating from the University of Maine in 1980.

His professional career has included over 30 years of work in radio and television reporting on important local issues for stations including 99.9 The Q, Ocean 104.7, Classical 107.5 and 95.1 WXTK. He also has worked in education.

In 2013, Will was elected to the Barnstable Town Council where he represented Precinct Six in Centerville.

Will and his wife, Judy, live in Centerville and are extremely active in their community, volunteering and serving on various boards and organizations.