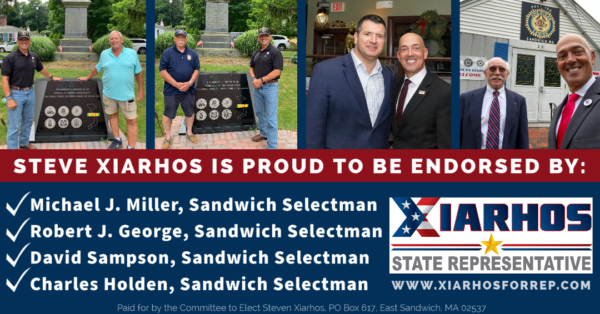 SANDWICH – Steve Xiarhos, Republican candidate for State Representative in the Fifth Barnstable District, announced today that his campaign has been endorsed by four of the members of the Sandwich Board of Selectmen.

Michael J. Miller, Robert J. George, David Sampson, and Charles Holden are all backing Xiarhos to represent the people of Sandwich as the next State Representative.

“Given my almost 40 years of personal experience with Steve, I am confident he has the skills needed to capably serve the people of Sandwich with honor and integrity,” said Miller, who currently serves as Chairman of the Board. “What’s more, as a retired Police Chief, public safety issues are important to me. Steve’s decades of law enforcement experience, including time working as a Deputy Chief of Police, convince me that he is the best candidate to advocate for public safety and support of our first responders. There’s no question in my mind that Steve has what it takes. I’m proud to endorse Steve Xiarhos for State Representative.”

“Steve Xiarhos is the best candidate to support the public safety of Sandwich residents,” said George, who currently serves as Vice Chair of the Board. “I worked for 48 years as a firefighter in the Town of Sandwich. Throughout my work, I always wanted to know that those in political office had my back. I can trust Steve to always support first responders and their work. That’s also evident from his endorsements by the Professional Fire Fighters of Massachusetts, the Massachusetts Coalition of Police, and the Massachusetts Police Association, among others. I am proud to endorse Steve Xiarhos for State Representative as the best choice for Sandwich and all the communities of the 5th Barnstable District.”

“Steve Xiarhos is the only candidate we can trust who will work hard for the people of Sandwich, especially when it comes to issues of fiscal responsibility and economic development,” said Sampson, who served as Chair of the Board from 2018 until June 2020, and who also serves as Chair of Xiarhos’ campaign committee. “Steve knows the criticality of the small shops and businesses that serve as the backbone of our regional economy here on the Cape. He also knows how important it is for people to get back to work, and to keep taxes low. Education is an important issue for the many young families in our community, and I know Steve will do what’s right for our students and teachers. Steve will fight hard for us on Beacon Hill. Steve’s dedication to service, transparency, and track record of success make me proud to endorse him as our next State Representative.”

“It is exceptionally important that our next State Representative be someone who is willing to work with local officials to do what’s best for Sandwich, and I’m confident Steve Xiarhos is the one to get the job done,” said Holden. “Like other communities, Sandwich relies on state resources like Local Aid to help fund our services and our schools. We also can benefit from state support when it comes to wastewater management and other infrastructure improvements, as well as preserving our beach areas. Those are important priorities for me, and having good communication with our State Representative is critical to make sure Sandwich receives what it needs, when we need it. I know Steve will be there for us and serve the people of Sandwich well as our next State Representative, and I am proud to endorse him.”

“I am extremely honored and gratified to receive the support of Mike Miller, Bob George, Dave Sampson, and Charles Holden,” said Xiarhos. “I would like to thank each one of them for the dedication and commitment they show to the people of Sandwich every day by serving as members of the Board of Selectmen. If I am elected State Representative, I hope to work very closely with the Board on issues that are important to the town, such as Local Aid, infrastructure, beach revitalization, and wastewater issues. I will always be available to help address their concerns and to serve as a liaison between the town and state government agencies.”