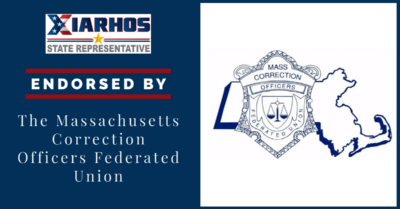 SANDWICH – Steven Xiarhos, Republican candidate for State Representative in the 5th Barnstable District, announced today that his candidacy has been endorsed by the Massachusetts Correction Officers Federated Union (MCOFU).

“Steve Xiarhos will fight hard for public safety and to improve the quality of lives for the residents of the 5th Barnstable District,” said MCOFU Legislative Representative Kevin Flanagan in a letter announcing the unanimous endorsement of members of the group’s Executive Board.

MCOFU represents the interests of approximately 4,000 correction officers from across Massachusetts.

“I am honored to receive the endorsement of the Correction Officers union, and I thank them for their support,” said Xiarhos. “Our state’s correction officers perform important and dangerous work. We trust them to maintain order in our correctional facilities, where they interact every day with some of society’s most dangerous and violent criminals. I respect and thank them immensely for the essential service they provide.”

Xiarhos has made public safety a cornerstone issue of his campaign. As a former Deputy Chief of Police, Xiarhos has pledged to push for tougher legislation to keep violent criminals and drug dealers behind bars. He also has vowed to continue work fighting the opioid epidemic which continues to hurt residents across Massachusetts. And, as an ardent supporter of police and other first responders, Xiarhos has expressed concern about police reform legislation passed by the Massachusetts House and Senate, saying current proposals risk undercutting important law enforcement efforts.

The MCOFU endorsement is the latest in a series of statements made by leading law enforcement officials and unions supportive of Xiarhos’ candidacy. Previously, Xiarhos has received support from Barnstable County Sheriff James Cummings, Plymouth County Sheriff Joseph McDonald, the Massachusetts Police Association, the Professional Firefighters of Massachusetts, the Massachusetts Coalition of Police, the Fraternal Order of Police, and the New England Police Benevolent Association. Altogether, these groups and officials proudly represent well over 35,000 men and women who serve on the front lines of public safety efforts across Massachusetts.

“I continue to be honored and humbled by the support I have received from all of these individuals and public safety groups,” said Xiarhos. “I have ultimate respect for the men and women who serve our state’s public safety organizations. From police, to firefighters, to correction officers, to EMT’s and medical workers, our state’s first responders include some of the best and most talented people in Massachusetts. I would like people to know I believe our state is made better by their work, and I will always have their back.”

Steven Xiarhos is a resident of West Barnstable and the Republican candidate for State Representative in the Fifth Barnstable District.

The Fifth Barnstable District in the Massachusetts House of Representatives consists of the entire town of Sandwich, plus precincts 11 and 12 in Barnstable, precincts 1, 2, and 7 in Bourne, and precinct 9 in Plymouth.

The general election is on November 3.