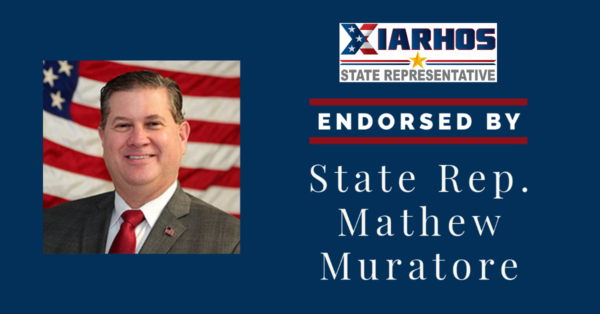 “Steve Xiarhos is a friend of mine, and I am certain he has the right mix of character and experience needed to be a successful State Representative,” said Muratore. “Steve’s many years of service as a police officer and Deputy Police Chief give him not only unique ability to work on issues of public safety and school security as a member of the Legislature, but also experience building coalitions and partnerships within the community. He’s a good advocate, but he’s also a good listener, and that’s important. As a Gold Star Father, Steve also has a long track record of helping some of our state’s most vulnerable populations, including especially our veterans. He is clearly committed to doing what’s best for the people of Plymouth, Sandwich, Barnstable, and Bourne. I know Steve will be there when people need him, and he’ll never let us down. I am proud to endorse Steve Xiarhos for State Representative in the 5th Barnstable District.”

“I am honored to receive Representative Muratore’s endorsement,” said Xiarhos. “Matt Muratore has served the people of Plymouth with compassion and integrity. As a former police officer, I especially appreciate his leadership in the ongoing fight against opioid abuse, which continues to be an important issue facing this region. He is also a vocal advocate for children and seniors across our state. These groups need focused attention from our elected officials to ensure their well-being, and Rep. Muratore is always there to answer the call. He is an important and dedicated voice for the people of Plymouth on Beacon Hill, and he has valuable experience building trusted partnerships between the state and local officials. I appreciate Rep. Muratore’s support and I look forward to the chance of serving alongside him in the Legislature.”

Mathew Muratore, State Representative for the 1st Plymouth District (Precincts 2-8, 10, 12, 14 & 15 in Plymouth), is in his third term in the Massachusetts House of Representatives. Previous to being elected to the House in November 2014, he was a Plymouth Selectman from May 2010-January 2015 and served as Chairman of the Board from 2012-2014.

In 2019, Rep. Muratore received the MASS Access Legislator of the Year Award. He was also recognized with the first annual Sam’s Award from To the Moon and Back for his advocacy in advancing the care and understanding of children born with substance exposure. Other honors he has received include the Legislator of the Year Award from the Arc of Greater Plymouth (2017) and the Champion of Tourism Award from the Massachusetts tourism community (2017).

In addition to his work in the Legislature, Muratore is co-owner and operator of Crayon College in Plymouth, Kingston, and Bourne, and he is also a partner in a health care consulting company specializing in elder care. He resides in Plymouth along with his wife, Kristin, who is a local attorney, and his six daughters.

Steven Xiarhos is a resident of West Barnstable and the Republican candidate for State Representative in the Fifth Barnstable District.

The Fifth Barnstable District in the Massachusetts House of Representatives consists of the entire town of Sandwich, plus precincts 11 and 12 in Barnstable, precincts 1, 2, and 7 in Bourne, and precinct 9 in Plymouth.

The general election is on November 3.