SANDWICH – The Committee to Elect Steven Xiarhos is pleased to announce that Steve Xiarhos’ candidacy for state representative in the Fifth Barnstable District has received the official endorsement of the Massachusetts Police Association. 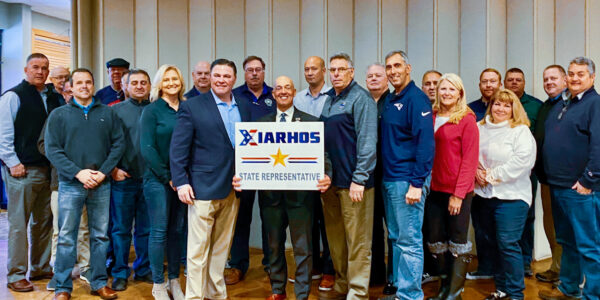 “Over your many years of service to the Town of Yarmouth, you have proven yourself to be an outstanding leader as a police officer and a vocal advocate for public safety,” said James Guido, President of the Massachusetts Police Association. “You have an outstanding reputation among your peers as a man of uncompromising integrity and honesty. While violence against police officers has risen to an unprecedented level, you are willing to take the lead in support of the issues that are affecting us most. In addition, as a Gold Star father, your selfless dedication to veteran’s issues is inspiring to all of us.”

For over 100 years, the Massachusetts Police Association has been a powerful voice for police officers throughout Massachusetts. The organization, which currently represents over 18,000 members statewide, strives to provide the men and women of law enforcement with the support required to get their job done safely and professionally.

“I am exceptionally honored, humbled, and grateful to receive the endorsement of the Massachusetts Police Association,” said Xiarhos. “As a former Deputy Police Chief and as a member of the Yarmouth Police Department for 40 years, I had the opportunity to work alongside heroes every day. The men and women who work in law enforcement across Massachusetts are second to none. As a police officer myself, I was proud to have their back on the job. And, I am proud to let them know that I will continue to have their back if I am elected to serve as a state representative in November.”

Steven Xiarhos is a resident of Barnstable and a Republican candidate for state representative in the Fifth Barnstable District (Sandwich, Barnstable Pcts. 11 & 12, Bourne Pcts. 1, 2 & 7, and Plymouth Pct. 9).

Steve spent 40 years serving the people of Cape Cod as a member of the Yarmouth Police Department, retiring in late 2019 from the position of Deputy Chief of Police. Throughout his career, Steve attended numerous specialized training courses and is a graduate of the Babson College Command Training Course and the FBI Law Enforcement Executive Development Seminar. He is the recipient of 22 various police department awards and decorations including Officer of the Year,  Yarmouth Area Chamber of Commerce Person of the Year,  Rotary Club of Yarmouth Vocational Service Award, Mothers Against Drunk Driving Officer of the Year, and the Barnstable County Human Rights Commission Rosenthal Award.