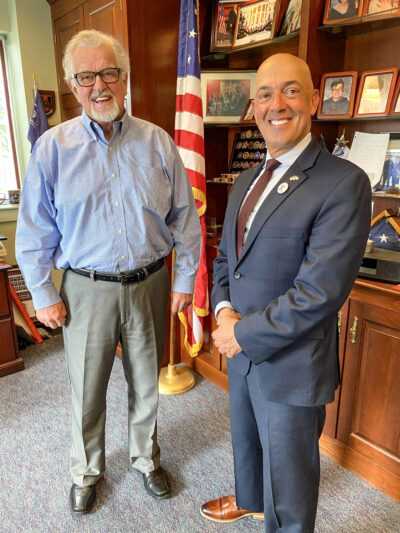 “There is no question in my mind, Steve Xiarhos is the best person for the job,” said Sheriff Cummings in a statement announcing his endorsement. “In a race where experience matters, Steve brings a wealth of professional experience, including four decades of law enforcement work, which will serve him well as a State Representative. We need people on Beacon Hill who will fight to keep Cape Cod safe. But, more importantly, Steve is a leader. Steve’s commitment to serving his community is second-to-none, and is perhaps his best quality. I have full confidence in Steve’s ability to serve the people of the 5th Barnstable District with integrity, energy, and enthusiasm. I endorse Steve Xiarhos to be elected State Representative.”

“I am honored to receive the endorsement of Sheriff Cummings, and I look forward to working with him to keep Cape Cod a safe place to live and work,” said Xiarhos. “Sheriff Cummings has been a true leader for our county and has done a tremendous job managing the Sheriff’s office. I am gratified to have his support in this race.”

Stemming from his career in law enforcement, Xiarhos has stated a desire to continue work on public safety issues if he is elected State Representative, including criminal justice reform to keep violent criminals and drug dealers off the streets. He also has prioritized work on fighting opioid abuse, opposing so-called “safe injection sites,” and opposing illegal immigration and so-called “sanctuary cities.” More recently, Xiarhos has stated his opposition to the release of violent criminals from Massachusetts prisons during the COVID-19 crisis.

Steven Xiarhos is a resident of Barnstable and a Republican candidate for state representative in the Fifth Barnstable District (Sandwich, Barnstable Pcts. 11 & 12, Bourne Pcts. 1, 2 & 7, and Plymouth Pct. 9).

Sheriff James Cummings was elected as the Sheriff of Barnstable County and sworn into office in January 1999. He began his career in Law Enforcement in 1974 when he entered the State Police Academy in Framingham. After assignments as a uniformed State Trooper out of the Framingham Barracks and Logan Airport, he was assigned to investigate organized crime in the Boston and South Shore areas. In 1977, he transferred to the Crime Prevention and Control Unit attached to the Office of Cape and Islands District Attorney Phillip A. Rollins. During his many years at this assignment, Sheriff Cummings became a court-qualified expert in matters relating to organized crime/gaming, narcotics and arson. He also coordinated and taught at the first homicide school ever offered at the Massachusetts State Police Academy.

Sheriff Cummings oversees the multi-faceted Barnstable County Sheriff’s Office (BCSO) which includes the operations of the Barnstable County Correctional Facility (BCCF) (opened by the Sheriff in 2004) the Bureau of Criminal Investigations, the Civil Process Unit, a K9 unit, a Marine Unit and the Emergency Communications (911 Dispatch) Center.