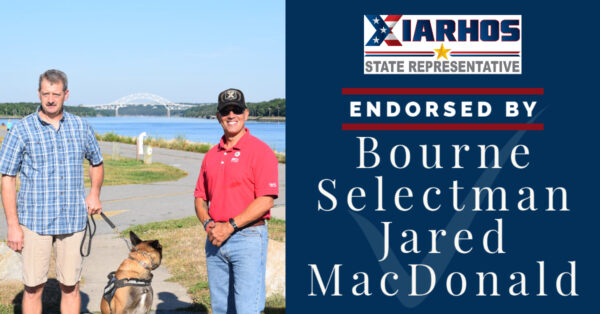 “I’ve known Steve Xiarhos for a number of years, and I have no question in my mind that he’s the right person to be our next State Representative,” said MacDonald. “We need someone who will be a strong leader to represent us on Beacon Hill, and I know Steve is ready to step up and lead. As a former police officer myself, I appreciate Steve’s experience working as a Deputy Chief of Police. I trust him to make smart decisions to keep violent criminals in jail and off our streets. I also appreciate Steve’s tireless work on behalf of Veterans like me. And, as a small business owner, I know Steve will be there to help restore our economy and get Cape Cod back to work. I am proud to endorse Steve Xiarhos for State Representative.”

“I am grateful for the endorsement of my good friend, Jared MacDonald,” said Xiarhos. “I have tremendous respect for what Jared has accomplished as a local official, a Veteran, a former police officer, and a small business owner. He’s a fighter, someone who shows tremendous grit and determination. I respect that and I respect his service. He is also a smart, capable leader for the people of Bourne, and if I am elected State Representative, I look forward to working with him to advance the interests of people on Cape Cod.”

Jared P. MacDonald was elected to the Bourne Board of Selectmen in 2018. Currently, he also serves as Vice Chair of the Board of Sewer Commissioners and participates in several committees working on economic development in town.

MacDonald proudly served his country as a United States Marine during Operation Desert Storm. Returning stateside, he continued serving as a Coast Guardsman, working in Federal Law Enforcement and Search and Rescue missions.

Following his time in the military, MacDonald served as a police officer in the town of Bourne for 18 years. In 2015, he was wounded in the line of duty while responding to the scene of a fatal home invasion and double-shooting. He subsequently retired from the police force and continues to recover from his injuries. He currently runs his small electrical business and serves the town of Bourne.